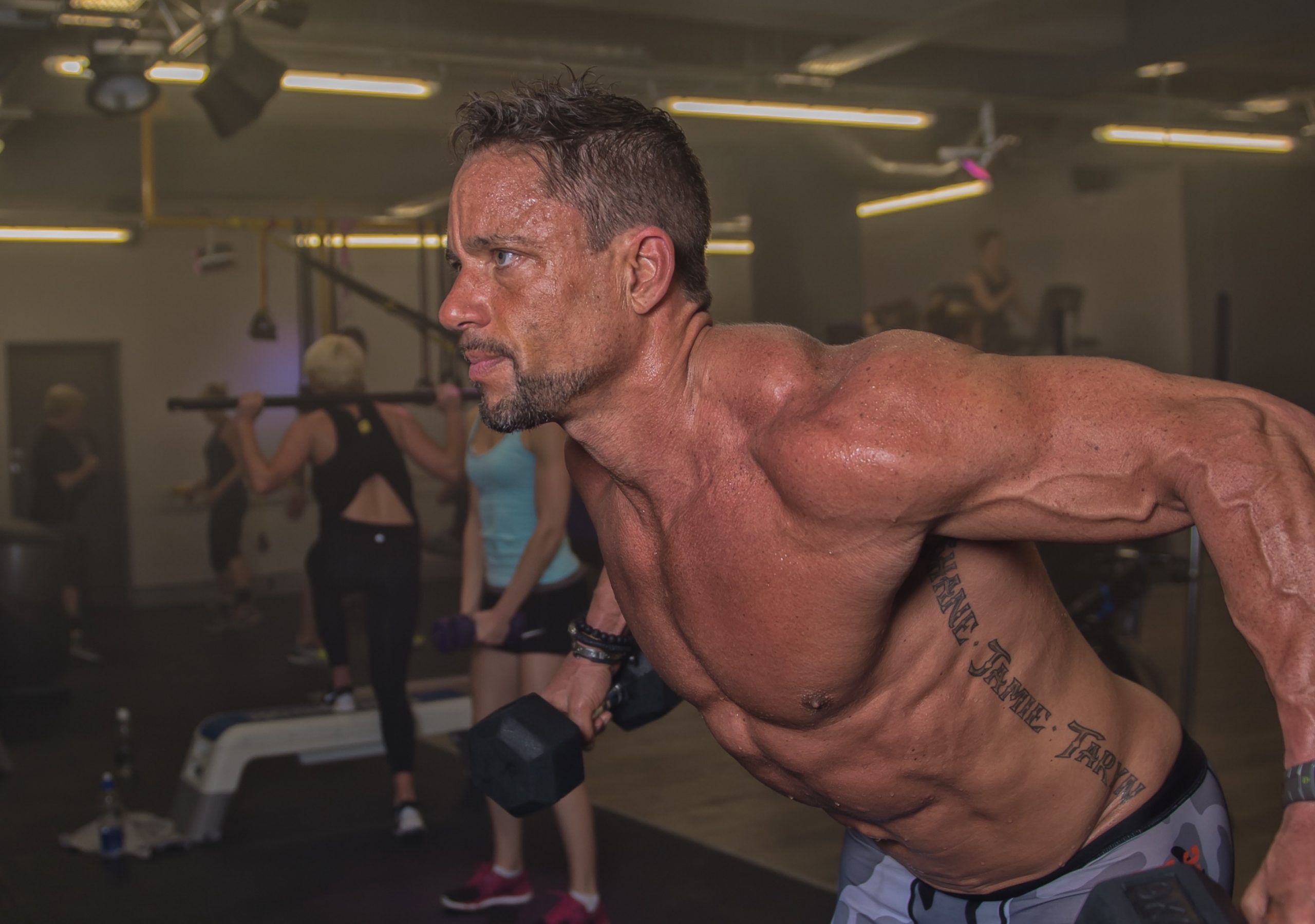 It’s Sunday morning and as usual the congregants arrive for worship in their ‘Sunday Best’. The reception area of this church is jam packed with people ready to praise and worship, the only difference is they are not at the church you may think, they’re at SWITCH Playground. Clad in their gym gear, mostly the SWITCH apparel, they socialize and down their pre-workout drinks and snacks like ‘Holy Communion’ before they enter the ‘prayer room’ – the SWITCH Playground.

The door of the studio opens and out walks the high priest – Steve Uria, as per usual, he cannot get to the mens locker room (a mere three or four metres from where he is standing) without being stopped by almost everyone in his path to greet, hug and kiss them.

The connection between SWITCH Playground creator Steve Uria and his followers is unlike anything I have ever seen before. Some have even compared his fitness movements to that of a cult, due to the unfaltering loyalty and dedication his concepts yield from clients. So I was interested to chat to the man behind two of the most popular group training concepts in the country and find out his secret to success.

Having lived and worked in Atlanta as a personal trainer and gym manager, he started seeing the gaps in the current way in which people were training and how personal trainers were operating.

Wardah Hartley: What were the gaps that you encountered in the industry?
Steve Uria: “One of the things I’d noticed after a while with a personal trainer, people start getting bored, they start becoming buddies with the trainer and maximizing their hour falls by the way side. I also saw the economy was sliding and a lot of trainers would come to me and say, listen I’ve only got five hours a day, how do I make more money. I got to thinking instead of training one person how do we reach out to multiple people. There were two choices, there was group fitness or there was an app. For me an app isn’t personal enough until you develop a group fitness platform. So I wanted to experience multiple personalities gelling with mine in a room.”

WH: This is not your first concept you’ve launched in South Africa, why do you think this one is so successful?
SU: “So what we’ve done in essence with this concept is, we’ve got multiple instructors, multiple stations, this is how you make this concept duplicable across the globe, it’s not about Steve Uria, it’s about SWITCH Playground. I’m the driving force, the creator yes, but I don’t have to be present, because people have the experience with multiple personalities.”

WH: So, you’ve come up with concepts like ‘Blast 900’, SWEAT1000 and now SWITCH, what is your process for coming up with such sexy names for your concepts?
SU: “When I first did the one in the States, BLAST900, it was ‘Balanced Levels of Aerobic and Strength Training’, I played on the word, 900 was the calorie count. Then when I came here, for SWEAT it was ‘Specialised Weight Endurance and Aerobic Training’ (1000 referring to the maximum calorie burn per class), then when I thought about it, this concept is High intensity circuit training, so what do you do, you switch. Plus I’ve switched completely from one business to another, plus people are going to follow me and switch, so I just liked the word ‘switch’.”

WH: Surely, you must know that while people love the workout concepts you design, a lot of its success hinges on people buying into Steve Uria as a brand, why do you think that is ?
SU: “It’s my pure passion and motivation for what I do. There’s not one part of me that does this other than for sharing my love for fitness, for helping people change, for watching lives change, even my instructors, having watched how they’ve evolved and the people they’ve become, through my energy and my passion.”

WH: How have you evolved SWITCH from your previous group training concepts?
SU: “The brand and creating the culture around it is paramount, people want to be seen and belong to something. For example with Soul Cycle in America – you get multiple people going to their classes, especially unfit women ‘cause you’re on a spinning bike in a dark room, you don’t have to do anything, you can slowly peddle and no one is judging you and I love that. That’s why here (At SWITCH) I am not going to scream at people on the treadmill, like when I was with SWEAT, even walkers at a slower pace felt inadequate, because they couldn’t do 10 (speed), so they would lose interest and they would leave. I now took the boot camp mentality and made it a more nurturing mentality so SWITCH is – ‘yes, you can do it, let me hold your hand and show you’, not ‘You’re a f**king loser, get up and do it’, it’s the presentation and how you present what you’re doing.”

WH: Fostering a more inclusive and less intimidating culture may be one ingredient to the SWITCH brand being a success, but going hand in hand once people become invested in the brand is making it look sexy and super trendy, that’s where you come in Robyn, why the big focus on having an entire line of SWITCH branded gym wear?
ROBYN URIA: “I’ve never worn gym stuff really and never understood why for a brand you would want to wear it in the studio. I’ve always said, when you walk out the studio, you want to wear a cool hoodie and walk the streets of New York or Cape Town or joburg or whatever, branding the gym. So the clothes I design and source are cool, comfortable and trendy. You want to be seen in it.” 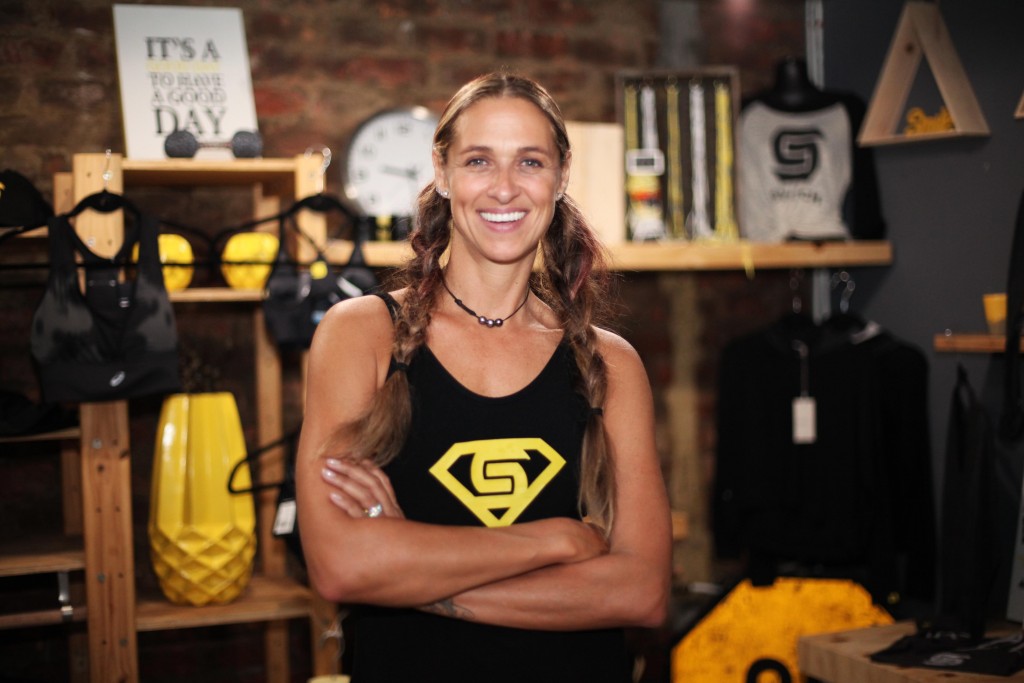 WH: The level of dedication by you both to the family business must impact your personal life – how do you guys cope?
RU: “It’s all part of our lives, eating, our shopping and our gymming and our sleeping patterns, and it’s been 25 years and it all blends in now. As for the kids, there’s been some tough times, they wake up every morning, their dad’s gone, he’s never really around on weekends, and it’s tough to do family stuff on a Saturday and Sunday cause he’s been so dedicated but we’re giving him two years, he’s got two years left to do what he has to do.”

WH: SWITCH is concept number three for you Steve, and you seemed to have improved on your previous group training concepts. Would you say that SWITCH Playground is your Sistine Chapel?
SU: “Yes, I see SWITCH as being my last dance, or my thesis on 31 years of exercise because it captures everything I believe in, from music to different exercise, to bringing the latest greatest, to multiple team members. It’s everything, it’s everything. Getting to so many people, you’ve got your 69 year old man, doing it with a pro Olympic athlete, both getting the maximum benefit and having the same joy, so I don’t think I can top this, I don’t want to.”

SWITCH Playground can be found in the following locations: